Lida Gordon left a legacy in the fiber arts community that empowered women artists, raised their profiles, promoted feminism and preserved the work of noted Kentucky fiber artist Alma Lesch. As a KFW grantee and longtime KFW community member, Lida impacted many artists and organizations that make up the KFW community.

“Lida was always so positive and encouraging to other artists, with an eye for strong artmaking and a commitment to feminism and community,” said Rae Strobel, KFW staff member. “You can really see her how her life and work ripples through the arts community generally, and specifically within the community of feminist social change artists.” 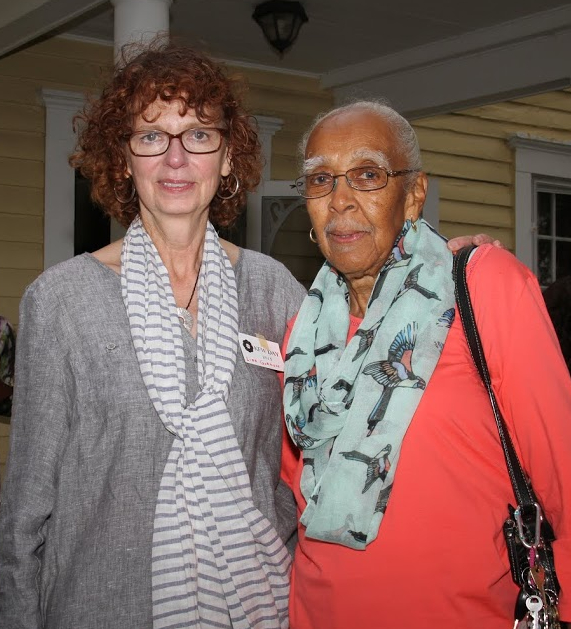 Denise Furnish, a young mother of three with an art degree, was looking to expand her knowledge and mastery of fiber art. She signed up for a Surface Design class with Lida Gordon at the now defunct Louisville School of Art.

“It was in her class that I was able to connect my life and my art degree to become a feminist and an artist. Her class was like a community. From nationally recognized artists she brought in and the books she shared, to the respectful ‘crits,’ she imparted excellence to all of us,” said Furnish.

She noted that the work she does today is firmly rooted in what she learned in Gordon’s class.

Gordon earned a B.A. in Art from DePauw University, and an M.F.A. from Indiana University in 1973. She was drawn to Louisville because of the work of Alma Lesch and joined the textiles program at the Louisville School of Art. She chaired that program until the school closed in 1983, when she was then invited to join the faculty of the Allen R. Hite Institute in the Department of Fine Arts at the University of Louisville and head the Fiber area.

When she died on July 17, 2021, her obituary noted that Gordon directed more than three dozen undergraduate theses and two dozen graduate advisees, many of them now regionally and nationally known.  Her energy and vision led these students – many of them women – to form the Louisville Area Fiber and Textile Artists guild (LAFTA), part of her enduring legacy.

Bette Levy, fiber artist and member of LAFTA said many textile artists in Louisville credit Gordon as their mentor.

“In classes, Lida encouraged her students, most of whom were women, to create and exhibit their artwork; she shared upcoming juried exhibitions and other opportunities that might be of interest to students.  She also brought in videos of influential textile artists who were women, as well as invited women artists to the classroom to discuss their work and influences.  She also showed some of her work, particularly earlier work, to demonstrate various techniques,” said Levy.

In 1998 the Louisville Area Fiber and Textile Artists recognized Gordon’s blend of artistic practice, teaching, and generous guidance in the award for “Lifetime Contributions to the Field and Performance as Role Model and Mentor.”

“I think her nurturing personality and encouragement of all of her students, whatever their level of development was a great contribution to the Louisville art scene,” said Levy. “She was respected for her personal characteristics as well as her vast expertise and willingness to share and encourage other artists.”

Furnish remembers Gordon’s work as sensuous. “Stuffed muslin cones huddled together on stretched muslin, coming forward from the picture plane. Soft and strong, masculine and feminine. She constantly pushed the identity of fiber as a medium with finely stitched vases as female form and rag mop and knotted fishing nets cast in bronze.”

Her faculty page at University of Louisville said her drawings and installations dealt with “archetypical female imagery in a contemporary context.” Her work was exhibited extensively across the United States.

Gordon’s legacy can be seen in galleries today. Elmer Lucille Allen first met Gordon in 2002 when she was seeking a masters in ceramics. In Gordon’s fiber class, Allen learned hand sewing, embroidery, paper making, stenciling and other fiber techniques, such as dyeing.

Gordon was also a force in the preservation of female artists. She worked to acquire Kentucky textile artist Alma Lesch’s papers for the Hite Art Institute, as well as over 40 of Lesch’s works for the Hite’s collection. She also received funding from the artist’s estate for the maintenance of the collection and then raised additional monies to mark their incorporation into the Margaret Bridwell Art Library as “Southern Gothic” in 2003, followed by the exhibition “Alma Lesch – a Life in Fabrics” in 2006 (which also put her fund-raising talents to work).  For many years thereafter, Gordon encouraged other collectors to donate their Alma Lesch works to the Hite collection.

Artist Jan Graves said Gordon’s influence remains a force in the Louisville arts community. “Lida Gordon was a bountiful gift to those whose fortune it was to study with her. She brought formality and rigor to her classes and assignments that inspired us to do our very best. Many of us were blessed with the joyful generosity of her friendship for many years,” said Graves.  “She remains a vital part of our frequent conversations about living our lives and creating art.”