The Firestarter award honors artists ages 18 to 25 who are taking risks in the creation of new art, engaged in social justice/community engagement, and who demonstrate a developing feminist voice, including new insights and visions and/or fresh approaches to feminist topics or art for social change.

Nominations come from the community and typically take place in the summer of each year.

The Firestarter Award honors a young feminist social change artist for their outstanding ability to inspire others to make a difference!

A Firestarter is: a young person (18-25) who shows meaningful promise in developing as a feminist, social change artist, whose work has the potential to create change for women and girls in Kentucky. Maybe they are not there yet, but they are on their way!

A Firestarter shows potential in: high quality artmaking, including taking risks in the creation of new art social justice / community engagement. This could be in a specific neighborhood, county or region in KY and/or a focus on artmaking that aspires to change the lives of women and girls in KY a developing feminist voice, including new insights and visions and/or fresh approaches to feminist topics or art for social change.

Firestarter Award Winners are selected by peers, not KFW staff. 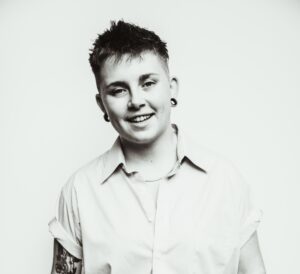 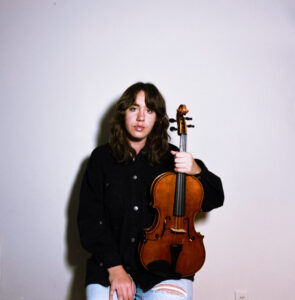 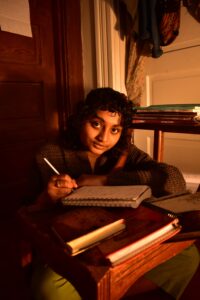 Edith Cruz, of Lexington, was nominated and selected for her audio podcasting work that explores social justice and feminism within the Latinx Community. Edith’s primary mediums are audio podcasting, storytelling and citizen journalism. Her podcasts center storytelling around immigration, biculturalism and bilingualism, specifically the experiences of persons with DACA, POC and Immigrant youth.

Malaya Wright, of Berea, was nominated for her painting and mixed visual media artwork that unabashedly showcases feminine sexuality. Her art explores topics such as questioning and unpacking of beauty standards, rape culture, radical Blackness, cultural and social homogeneity, controlling images of Black women, the importance of intersectionality, colorism, normalization of plastic, or beauty.

Rachel Petri, of Independence, was nominated and selected for her literary writing, both fiction and nonfiction, and the way she infuses disability advocacy into her work. She writes Young Adult (YA) fiction that addresses issues related to disability, through her characters and as a central theme of her work.

Dayzaughn Graves,  of Richmond, was nominated and selected for her visual poems and multimedia work supporting Black Lives Matter, building collaborations and supporting other artists. She says of her art, “I discuss the intersections of my identity, race, womanhood, blackness, mothering and expression art. I am a Multicultural multimedia storyteller. In doing so, I connect peoples stories to anyone who is willing to listen.”

Jaylin Monet Stewart, of Louisville, was nominated and selected for her murals and installation works, around topics such as healing, social justice, race, gender, gun violence, police violence and more. She creates large scale murals, and works with paint and chalk along with other mediums. She says, “my work is to heal and empower people of all kinds. I create to inspire individuals to believe in something greater than themselves and stand up for what it is that they believe in. I create art to acknowledge the past and the future, but also as a tool to enlighten people.”

Red Biddix, of Louisville, was nominated and selected as a Firestarter Award Winner for their work in fashion and spoken word. Red’s work lifts up issues such as mental health, Black lives matter, black girl magic, pride, and community. Red is the creator of the clothing line Vintage as Fuk, which promotes mental health awareness. A single mother, Biddix has dealt with anxiety and depression. Under the pseudonym Afrodisiac, Red also creates written word poetry and textile work with a focus on color and freedom from labels. They have worked with the city on community murals. Their approach is multifaceted. They draw, paint, and work with textiles to create a whole world of color. Their unapologetic use of words to make us think, their street style and handpainted textiles are a tribute to the black gender spectrum.  Red is pushing boundaries and taking risks in their art, bringing fresh approaches to feminist art for social change.

Candy Glass,  of Grayson, was nominated for her feminist work in both visual arts (painting/drawing) and performance art (aerial acrobatics). Candy graduated Ashland Community and Technical College in 2017 with an Associate of Arts degree and works with visual arts and performance/aerial arts to address topics including mental health, body positivity, LGBTQ+/equality, female empowerment, freedom of expression, desexualizing nudity, chronic illness, sexuality, self-growth, and individuality. Candy’s art is created from a unique feminist voice. Both her two-dimensional art and her Cirque and Flow dance deal with feminism, equality, and the female form. Her drawings are thought provoking and insightful. Reoccurring themes in her artwork include mental illness, body positivity, desexualizing the naked female body, and female empowerment. She is also a member of the performance art troupe, the Cosmadolls, which is centered around female empowerment, self-love, and social change. Cosmadolls performs to raise funds for domestic violence shelters and Trans Equality. Candy’s art has exposed subjects considered “taboo,” to some audiences, yet she persists.  Candy is not afraid to create art that is provocative, controversial, and feminist.

Mackenzie Fraley, Inez (Martin County): Mackenzie is a Theatre minor at the University of Pikeville. In her work with the theatre (Both at UPIKE and at Jenny Wiley Theatre), Mackenzie has sought roles that focus on female empowerment. For example, she played Aunt March in “Little Women”, a strong, independent woman. Mackenzie has taken risks with the types of roles she has sought in theatre. The topics she has tackled with her work include domestic violence in a Murder Ballads project, sexual assault and abuse in The Amish project, and mental illness in Next to Normal. These issues have forced Mackenzie and audiences out of their comfort zones and brought awareness to important factors in the lives of women.

Brianna Harlan, Louisville: Brianna works to make her art the “happening” that causes something to occur to the viewer. Through visceral storytelling and radical vulnerability, her process prompts and then manifests experiences with participants into works that invite others to discover, reflect, and shift their consciousness. Brianna focuses on creating artwork that can spark a moment of reflection in her viewer. She takes her lived experiences and the experience of others and transforms them into art that can speak across identities, age groups, and race to spark dialogue and change on an individual level. She is dedicated to her art career and to an art practice that can inspire change. She is a member of the founding class of Hadley Creatives and inspired classes at Meyzeek Middle school where she was a resident artist for the “Heroes + Sheroes” project with IDEASxLAB.

Jeri Katherine Howell, Frankfort: Jeri Katherine Howell is an Americana singer-songwriter-guitarist and teaching artist whose workshops and original songs focus on accessing one’s authentic self, building community, and “bringing to the mic” local and global social and environmental injustices. She facilitates community arts workshops (songwriting, collage and more) focused on social change and resiliency. She has been a part of several innovative projects including facilitating a songwriting workshop with the women in Franklin County drug court as part of Hands Healing HeArts programming; participating in the Kentucky Dream Coalition’s “Artivismo” camp, during which she facilitated a “songwriting for social change” workshop in English and Spanish with several Latinx high school students; teaching beginning guitar lessons in Spanish to migrant workers at the Backside Learning Center at Churchill Downs; and touring Japan as lead singer in a band for “Kentucky Bluegrass Week.” Her songwriting focuses on various social and environmental justice issues including the experiences of indigenous women in Guatemala, environmental racism and climate justice, and the experiences of child refugees migrating to the U.S. from Central America. Through her music, Jeri demonstrates a unique feminist voice using traditional Kentucky music roots and intentional lyricism to highlight the intersections of oppression in our local and global communities. She received a 2017 Fulbright grant to teach in Costa Rica and has recently been accepted into the Kentucky Arts Council’s Performing Artists Directory.

Lacey Trautwein, Louisville: Lacey Trautwein writes poetry and creative nonfiction and publishes an innovative literary magazine. Lacey, who prefers they/ them/ their pronouns, often focuses their work on issues relating to sexual abuse, body issues and consensual love. Lacey also runs a literary magazine, Lemon Star Mag. They say, “I assist young voices in an online literary publication, Lemon Star Mag, to truly shine that are otherwise not given a platform.” Lemon Star Mag is an open space for truthful work from writers and artists of all backgrounds and orientations. With Lemon Star, the main focus has been to support women, people of color and the LGBTQ+ community. Lacey provides a safe space for anyone who needs it, part of their nominator’s definition of feminism.

Amani Nichae, of Lexington, was the recipient of the 2017 Firestarter Award. Amani is a photographer and activist. A student at the Art Academy of Cincinnati, she is a photographer for Be Bold, an organization dedicated to feminist ideals of positive body image, self-esteem, and the empowerment of girls ages nine to eighteen. Amani organized Fairly Local, a Lexington art show designed to showcase artists and build community that benefited Step by Step Lexington, a mentoring program for at-risk young single mothers ages fourteen to twenty-four.

Annie Erskine was the 2016 recipient of KFW’s Firestarter Award. Annie was honored for her unique comic art and her strong voice for underrepresented people in the comic industry, particularly LGBTQ individuals. Annie is committed to paving the way for more female comic illustrators and greater representation of women, people of color and members of the LGBTQ community in the national comic industry. addition to working for national companies, Annie also creates her own independent art through her original comic series, Variants.

Alexis D. Meza is the inaugural recipient of KFW’s Firestarter Award. Alexis was nominated by KFW grantee Diane Kahlo and received the award in 2015. Born in Veracruz, Mexico, Alexis is a visual artist and graduate of Kentucky State University where she studied mass communications and journalism. She is currently developing a radio show as well as a documentary showcasing the experiences, struggles, and contributions of Latino immigrants in Lexington and across Kentucky.