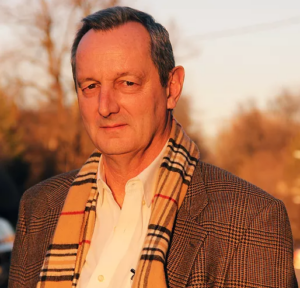 KFW mourns the loss of editor, poet and teacher Frederick Smock, a professor of English and director of Creative Writing at Bellarmine University and a former Kentucky Poet Laureate. Smock died on July 17, 2022. He was 68 years old.

Smock edited The American Voice, which was founded by Sallie Bingham through the Kentucky Foundation for Women in 1985. Feminist in approach, the literary journal featured the work of women and marginalized writers. Some of the writers included in its pages were Kentucky-based writers Wendell Berry, James Still, Gayl Jones, Sena Jeter Naslund, and James Baker Hall, as well as national and internationally-known writers Isabel Allende, Louise Erdrich, Marge Piercy, and Yusef Komunyakaa.

“During the fifteen years that Fred edited The American Voice, he was a devoted and inspired editor with an unusual sensitivity to women writers, finding new ones and resurrecting old ones; he understood the importance of paying our contributors and over his tenure, built up a national reputation for the Voice that made it a distinguished project of the Kentucky Foundation for Women. His calm in the midst of turmoil and his delightful sense of humor made him a delight to work with. I will always miss him,” said KFW founder Sallie Bingham.

George Ella Lyon, Kentucky Poet Laureate from 2015 to 2016, first met Fred when she submitted work to The American Voice. “He was an astute and responsive editor, and I learned from his criticism. The journal itself was a gift, issue after issue, with stunning offerings by a wide range of writers,” said Lyon.

She also admired his approach to his role as Poet Laureate of Kentucky from 2017 to 2018, a post she held preceding him.  “As Poet Laureate, Fred’s intent was to bring poetry to as broad an audience as possible, and he did that by simply reading and talking about poems, and reminding listeners of the joy in sound, rhythm, and rhyme that we have as children. Poetry isn’t for the few; it is our birthright,” said Lyon.

His work also appeared in leading national and international journals, including The Iowa Review, The Hudson Review, The Southern Review, Poetry East, Ars-Interpres (Sweden), The Georgetown Review and Olivier (Argentina). Garrison Keillor also read his poems during broadcasts of A Prairie Home Companion.

Smock joined Bellarmine when The American Voice ceased publication in 1999. He specialized in Modernism, 20th Century American Poetry and Creative Writing. He also taught classes on Poetry of Witness, Peace Studies and British World War I Poets and taught in the KIIS Denmark Summer Program. He served as a time as the advisor for Ariel, Bellarmine’s Literary Magazine.

Lilly Cary studied with Smock from 2005 to 2008. “His love for writing was infectious. He taught his students with compassion and authenticity in a way that made him stand out from other professors,” said Cary.

“Since my time in college, I have looked to Fred not only as a mentor but as a friend. He wrote me a letter of recommendation for grad school, and we would occasionally meet for lunch and wine at my mother’s former restaurant, Lilly’s Bistro. I will remember his kindness. I will remember his thoughtfulness. And, of course, his love for the written word. Wherever you are, Fred, I hope you are drinking a glass of merlot, with ice cubes, of course.”

Though he is gone, Smock’s legacy will endure through his work and words. “Like his work, Fred was elegant and understated, his intellect dancing with his sense of humor and deep spirituality.  His death is a loss to his family and friends, to Kentucky readers, writers, and students, and to the great conversation of poetry,” said Lyon.