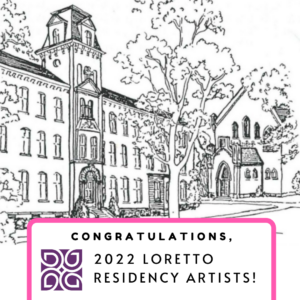 KFW is excited to announce the recipients of this inaugural partnership between Sisters of Loretto and KFW, the 2022 Loretto Residency Program. Residencies will span one to three weeks and take place in June, July, and August 2022 at the Loretto Motherhouse in Nerinx, Kentucky. Residents will be provided with housing, a food stipend, and the option of studio space, which includes the use of an art studio, tools, and equipment.

Each participant will lead a public outreach/educational activity with the local community upon completion of the residency. They may choose to give an artist talk, a reading, or an exhibition of their work in the Loretto gallery. Attendees will include the residents and community of the Loretto Motherhouse.

Residencies are for literary and visual artists who have demonstrated achievement in creating work high in artistic merit that is based on social justice issues/concerns. KFW partnered with the Sisters of Loretto, whose mission centers on working for justice and acting for peace.

The 2022 Loretto Residency program was open to feminist social change artists and writers who reside in Kentucky. Writers and visual artists with varied backgrounds, worldviews, cultural heritages, and sexual orientations were encouraged to apply. KFW is committed to making the residency program accessible to a wide range of women regardless of age, race, ethnicity, sexual orientation, educational level, economic condition, or geographic origin.

Jayne Moore Waldrop (Lexington), a fiction writer, plans to revise the rough draft of a sequel to her first book, Drowned Town, about the displacement and loss of home in Western Kentucky when Land Between the Lakes was created through eminent domain. The sequel addresses dislocation and environmental changes from the December 2021 tornadoes that hit western Kentucky.

Jessica Farquar (Louisville), a poet, plans to complete the first draft of her poetry manuscript-in-progress by writing and revising new poems to ensure a cohesive project. She creates poetic works that address the whole experience of womanhood, including mothering and aging.

Erin Miller (Berea), a textile artist, plans to expand her understanding of natural dye processing by making stable watercolor paints out of natural pigments, making a series of small watercolor paintings, and dyeing cloth that will be used to make a quilt or quilts. Her work addresses spirituality, skepticism, and appropriation.

Melissa Bean (Louisville), a mixed media artist, plans to work on a show for the end of June entitled “Lasting Impressions.” The show will consist of mixed media pieces she is creating based on books she’s read and the strong women who have had an impact on her life.

Chaney Williams (Elizabethtown), a poet, essayist, and visual artist, plans to generate poems and essays for her collection about her maternal ancestor who was one of the Catholic settlers who came to Marion County, Kentucky in 1786. She is especially excited about the location of this residency because of her family’s ancestral connection to Marion County and the Sisters of Loretto. She also plans on making a fiber art piece to accompany this collection.

Rachel Reeher (Whitesburg), a literary artist, plans to complete the second draft of her novel, Birdie, which examines disordered eating, religious repression, and untreated mental health issues. Her writing is spurred by her background in fringe religion, and explores and interrogates spaces of trauma. Her work reimagines these spaces to open possibilities for self-restoration and communal healing.

Mandy Olivam (Louisville), a literary and mixed media artist, plans to use the residency for both personal and collaborative work around healing and racial justice. She received a joint residency with Cory Lockhart, during which they will create written resources that explore embodied practice around racial justice and healing of internalized white body supremacy.

Cory Lockhart (Louisville), a writer and visual artist, plans to use the residency for both personal and collaborative work around healing and racial justice. She received a joint residency with Mandy Olivam, during which they will create written resources that explore embodied practice around racial justice and healing of internalized white body supremacy.

Amy Richardson (Olive Hill), a writer, plans to work on the first draft of her novel in progress, tentatively titled Sweet Turned Earth that addresses issues of environmental justice, emphasizes the importance of our relationship to the land, and explores the often-unrecognized work of women throughout Appalachia spanning the generations.

Bryn Silverman (Louisville), a film and television screenwriter, editor, and producer, plans to complete a short film script about Kentucky sculptor Enid Yandell, who came to international acclaim at the turn of the century for her portrait busts and monuments. The film includes themes around erasure of women’s legacies as well as women’s relationships with one another at a time in American history when women’s participation in the workplace or in high art was not encouraged.

“This joint endeavor strengthens our connection with an organization that shares our vision of a more just, peaceful world. It offers a unique opportunity for feminist artists who need time, space, and funds to create and work on their art, to advance their artistic development, and participate in building community. Residents will share ideas, exchange work, and make connections that yield an impact that will be felt long after the residency is over,” said Sharon LaRue, executive director of the Kentucky Foundation for Women.

“The Loretto Community is delighted to collaborate with the Kentucky Foundation for Women on a program that combines the arts and social justice, two aspects of our work that we have practiced for the last 200 years,” said SR. Cathy Smith, Sisters of Loretto.

The Kentucky Foundation for Women is a private foundation formed in 1985 by Louisville writer Sallie Bingham.  Its mission is to promote positive social change by supporting varied feminist expression in the arts.